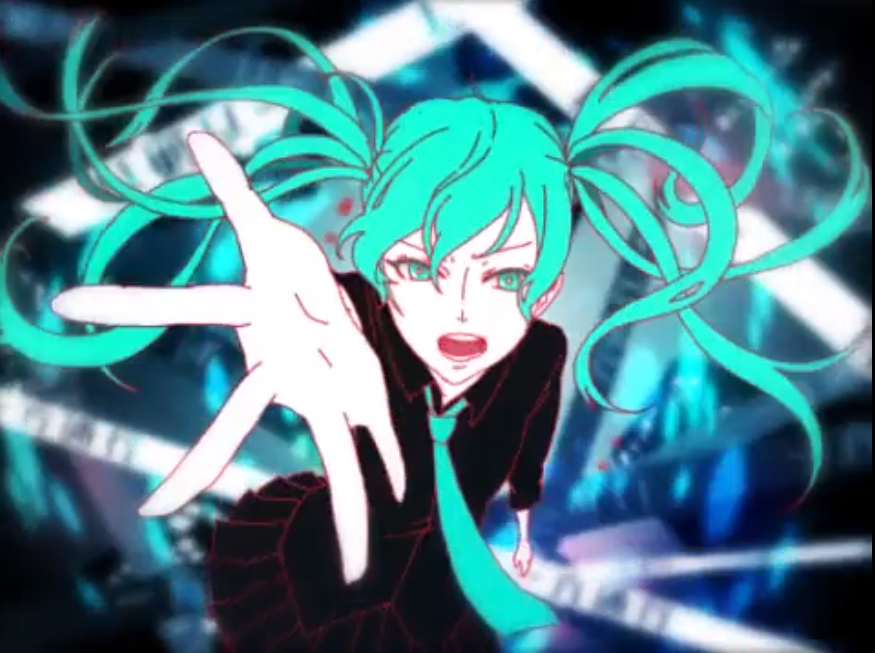 In the Corner of the Whole World, a One-Two: What Wowaka's Work Meant to Me

I found Vocaloid at a particularly difficult part of my life. As my home life escalated to a boiling point, my untreated anxiety disorder developed into a nearly impassable barrier, I grappled with my identity and middle school made a thorough mess of me, it was a welcome escape closely tied to the friendships that got me through those years. I wasn't really allowed to use the internet much at home at the time, but some of my friends with looser web access had come across Vocaloid and introduced me to it at a sleepover. Watching grainy Vocaloid videos that had been ripped from Japanese video sharing site Nico Nico Douga and reposted on YouTube became a staple of nights like that, and my older friend stuffed my MP3 player full of audio tracks ripped from those reposts. Miku started making regular appearances in my school friend group's drawings and comics, and, as we transitioned into high school, remained a regular talking point at the lunch table. Vocaloid and related vocal synth programs like UTAU and CeVIO that overlap greatly with its scene have remained an important part of my life, even though my middle school and early high school years and the golden age of the fandom are long gone. Wowaka was and is an important part of that.

Wowaka was one of the most famous and beloved producers in the Vocaloid scene. He's best known for "Rolling Girl," a song about trying one more time, one more time, even when it seems the whole world is against you and, perhaps, you're considering giving up and ending your own life. (Here's the official song upload on YouTube, and here's the official upload of the fanmade PV by Akiakane and yama_ko that's since become famous, complete with English subtitles.)

For many, this is wowaka's most important work. Even without understanding its lyrics, the song is powerful, emotional, turbulent. It captures the desperation that many depressed people experience -- both to escape their seemingly meaningless suffering, and to continue to live and keep trying anyway. It propels the listener onward toward another chance at happiness. I know it hurts, it says. Keep rolling.

"Rolling Girl" was meaningful for me in those years in ways that I couldn't parse -- because I couldn't really parse what was happening in my life at the time -- but still felt deeply. It resonated with me and what I was going through. Even after those chaotic years ended, "Rolling Girl" has remained an incredibly powerful piece of art that has helped and continues to help me and many other people I know. This is, rightfully, wowaka's crowning work.

All that said, it was not "Rolling Girl" that wowaka most profoundly affected me with. It was "World's End Dance Hall."

"World's End Dance Hall" (official upload here) called to me even more strongly than "Rolling Girl," the English sub of the PV by Taku and AO FUJIMORI especially. I didn't understand why. But it gave me what I needed anyway. The same turbulent emotion heard in "Rolling Girl." The lyrics' bittersweet love. The desire to escape the cruel, cold, lonely, judgmental world that the singers can't seem to fit into. The tender care, the devotion, the seemingly forbidden spark between two girls.

It meant something to me, though I didn't know what. As I grew from oblivious confusion and discovered myself in the aching, lonely closet it was still there for me. Seeing myself and what I was going through in "World's End Dance Hall" was profoundly comforting.

Positive representation for lesbians and LGBT people in general is, as you may be aware, hard to find. For women-loving women, a lot of content fetishizes us or reduces our experiences of love and sexuality with other women to some kind of phase. In the case of lesbians in particular, many works push the incredibly dangerous and lesbophobic idea that lesbians can be made to like men somehow. That's not even getting into the "bury your gays" trope that's condemned LGBT characters to death and tragedy for decades, or the problem of coding exclusively villains as LGBT. Positive LGBT content from the past exists, but is often hard to find due to systematic erasure of our existence, the necessity of keeping things secret and, of course, the usual threats of damage and misplacement that put many historical artifacts at risk. There's thankfully been a push in the past few years for more positive representation in the media, but it's been slow going, especially given the opposition any form of LGBT visibility inevitably garners, and in many cases even if there are any LGBT people and spaces available to fill the lonely void many youth experience, gaining access to them can be complicated.

That's why any media that allows us to see ourselves represented that feels positive, even if it's unintentional, even if it's imperfect, can become very meaningful to an LGBT person. And for me, that's what "World's End Dance Hall" was. It was a reminder that I wasn't alone, that my feelings weren't so alien that no one in the word had ever felt them before. Whether or not that's what he intended, it's because of wowaka that I got to have that small support during a pivotal time in my life.

I decided to talk about "World's End Dance Hall" because news broke earlier this week that wowaka passed away. Though I've tried here to put my thoughts all in order in a way that makes sense and pays him the respect he deserves, I still can't quite outright express how I feel about his passing. I only hope that he passed knowing how much of a positive impact his work has had on so many people in the Vocaloid scene at times when they really needed it. Thank you, wowaka. Sincerely.

Sayonara, with such happiness...

Note: The subtitled upload linked here was posted by lordxwillie, with translations and transcriptions done by 1angelette (English translation -- can't seem to track down a source outside of the blog post that credits them and provides their translation), motokokusanagi2009 of Vocalochu (romaji transliteration), and yanao (Chinese translation), as credited in the video description. Warning for the linked Vocalochu blog's "About Me" header if you're sensitive to homophobic slurs, as it uses the f slur.