Alone in the Dark: The New Nightmare Isn't a Nightmare After All

Pulling an unknown horror title off the shelf is always a gamble. After all, last time I decided to try a random horror game for the original PlayStation, I ended up with Clock Tower 2: The Struggle Within, a horror point-and-click so awful it's since become my all-time favorite bad game, so it was a surprise when I discovered my latest pick wasn’t bad. In fact, Alone in the Dark: The New Nightmare actually turned out to be a pretty cool game.

I’d never played an Alone in the Dark game before, but I feel like I should have sooner. The first Alone in the Dark, released in 1992, is an important part of video game history, having laid the groundwork for survival horror even though the term was first used in 1996 to describe Resident Evil, the game that really defined and popularized the genre.

Coincidentally, I’ve heard speculation that New Nightmare (also colloquially called Alone in the Dark 4) was meant to compete with Resident Evil, perhaps in an attempt to take back the survival horror throne, and it really feels that way. At first playing it made me want to just play early Resident Evil games, but then it scratched that very itch -- the game uses tank controls and other elements common in the genre to create an experience not only reminiscent of early Resident Evil, but good in its own right.

this looks so nice ? most of the environments in this game look pretty good but this one stands out pic.twitter.com/xRV2acIKaB

New Nightmare’s tank controls make movement slow outside of sprinting, and are clunky at any speed. If you aren’t familiar with them, tank controls require players to press left or right on the directional pad to rotate, and up or down to move forward or backward respectively. They take a bit to get used to, and they’re a bit of a hassle even after you’re warmed up, but that’s the beauty of it; something about being less able to escape sudden attackers creates a more suspenseful atmosphere. This atmosphere is aided by the sense of emptiness that comes with the protagonists’ frequent isolation, the heavy soundtrack that makes its appearance in between bouts of tense silence, and many dim, claustrophobic passages framed in pre-rendered backgrounds often both beautiful and uncertain, with danger regularly kept just subtly out of sight by tight camera angles.

As you would expect from any game in the genre, limited ammunition plays a role in New Nightmare, and plays it well. Players are forced to decide when and how to use what little ammo they find for what few weapons they come across, and if they’re brave enough to poke around looking for more. It’s just another layer of tension on top of an already-tense experience. Limited save items, which serve a similar purpose, also make an appearance in Alone in the Dark 4, but I have a bone to pick with how they’re implemented: instead of saving all of your progress, the “charms of saving” you find scattered around the game’s world only save your progress up to when you entered that room. What’s worse is this is never once mentioned by the game. I figured it out myself eventually, but not before I made the mistake of saving right after a tricky boss fight in the same room the fight took place in, and ended up having to redo the fight the next time I played. Despite the glaring flaws of New Nightmare’s bizarre save system, though, I still feel that the limited saves really do add something.

The game’s mostly indirect method of storytelling only furthers the feelings of unease the game’s other elements create, all while drawing you in. There’s a reason that communicating fragments of story through found documents and occasional brief conversation is a pretty common element in survival horror, and it’s not just that it’s hard to fit exposition into games with a heavy focus on isolation -- with only a partially pieced-together understanding of the dangers around you, you have no choice but to be wary, yet intrigued (unless you’re not a big fan of reading, in which case the sometimes lengthy chunks of text might bore you). New Nightmare’s story is fairly interesting, too; the game’s gloomy setting, Shadow Island, is populated by creatures of darkness, and the Morton family seems to have taken their curiosity about these monsters a little too far. It also has two routes, anthropologist Aline Cedrac’s more puzzle-oriented game and private investigator Edward Carnby’s more action-packed game, that tie together neatly and offer a unique look at both sides of the game’s story.

That doesn’t mean it’s immune to writing problems, though. It feels like there’s a lot missing in several areas. While players can still mostly piece the game’s story together from what they’re given, there’s a mysterious Mr. Lamb and an equally enigmatic government agency involved with Shadow Island that are hinted at but ultimately receive no real attention and just become vague loose ends. Individually, our protagonists’ personal motivations have so much potential but fall flat on the ground -- Carnby’s drive to uncover the truth about his friend’s death and Aline’s desperate desire to finally find out who her father is (I’ll be covering my frustrations with her story in a separate article in November) are both largely ignored except for a few passing remarks that wrap things up but remain unsatisfying. As a team, they have an inconsistently-written relationship that only serves to confuse players rather than interest them. Altogether, New Nightmare’s story simply is not fleshed out enough in these areas.

Aline and Carnby are also treated very differently. They both are motivated by their own personal interests to come to Shadow Island, and both play an equally large role in saving the day. But Carnby is told outright that he is the chosen hero, and the game even goes so far as to explicitly clarify that Aline is not. Even after everything is said and done, and Aline has more than proven her importance to the storyline, there is no acknowledgement of her hard work and sacrifice. Put simply, a man is declared a hero for putting in the same amount of effort to save the day as a woman, all while it is blatantly stated that the woman is not a hero, and that rubs me the wrong way.

Carnby’s hero status brings up another issue: he’s white, yet he’s selected as the hero of a Native American tribe. Here’s my disclaimer: as a white person myself, I’m not qualified to talk deeply about this issue, but I don’t want to ignore it, so I’ll keep this brief. There’s already something kinda fishy about a story based on American Indian legends and locations, even if the tribe is fictional, without any actual American Indians in it besides for one “witch doctor” that doesn’t even show up that much, and a white man acting as the hero for a Native American tribe reeks of white savior bull. This isn’t my topic to delve into, and I’d love to hear Native Americans’ opinions on it (I couldn’t find any discussion about it online specific to the game), but for now it’s certainly something I’m a little wary about.

Alone in the Dark 4has an array of non-writing issues for players to contend with as well. Quite frankly, a lot of puzzle solutions and “next steps” seem almost random. There are no subtitles, and it’s very easy to miss information when you can’t tell what the characters are saying. The journal, a specialized file meant to keep track of what you find out as you go, doesn’t update nearly regularly enough to offer much help, and the map system is too busy being confusing by itself to guide you. It doesn’t help that the game seems buggy -- I noticed a few specific warnings about specific glitches in walkthroughs that, had I not read about and avoided them, might’ve forced me to reset my console and jump back to the last save. There’s also this annoying (albeit ultimately harmless and sort of funny) bug I came across:

ITS WHATEVER NOISE THIS IS & ITS ONLY IN THIS AREA & DOESNT HAPPEN WHEN I DASH PLEASE HELP ME pic.twitter.com/oU6vMcq4Hs 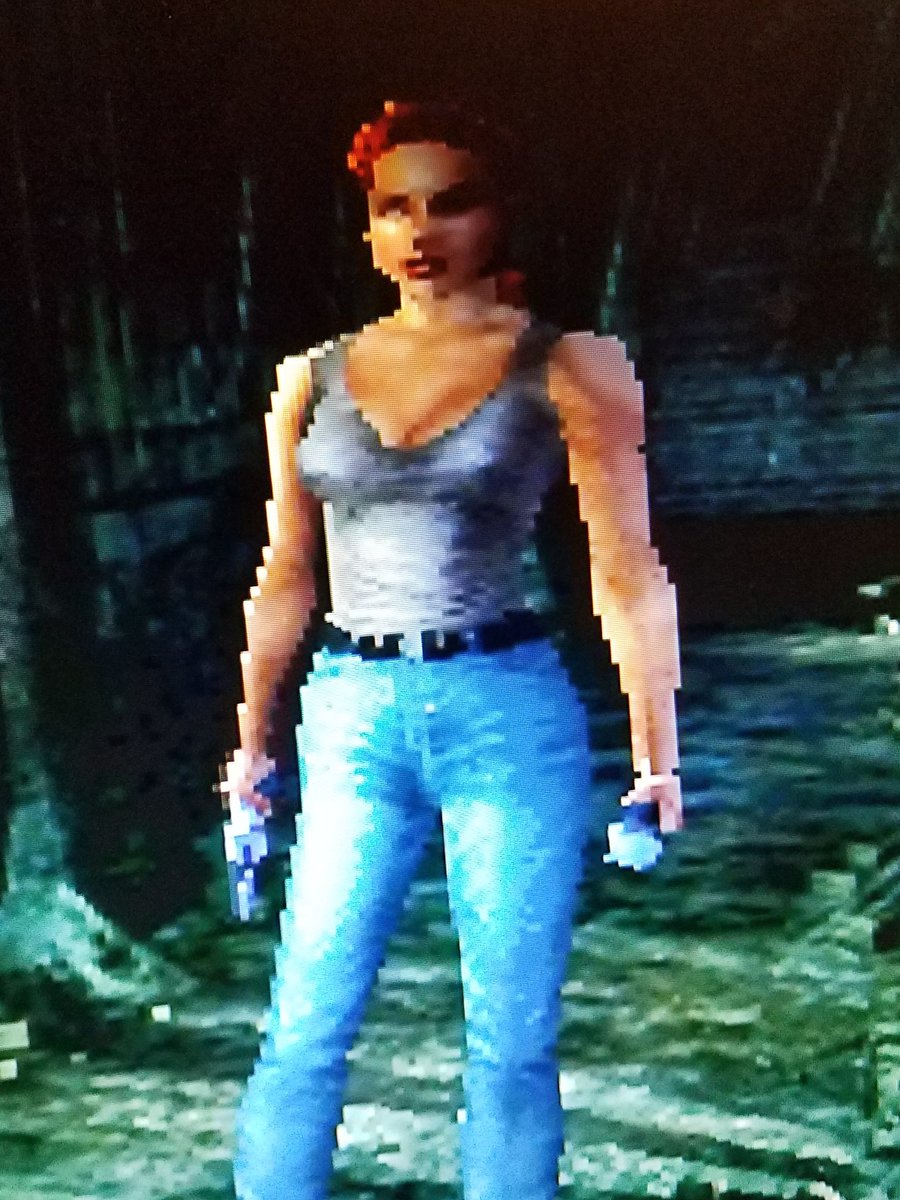 On a related note, there are some flaws that end up making the game more enjoyable in my eyes. There’s the cheesy, awkward voice acting and dialogue you might expect from a game similar to Resident Evil, and a bizarre mix of normal cutscenes and often confusing cinematics. Perhaps my favorite, however, is Aline’s model. It may be a relic of sexism in gaming, sure, since Carnby got nowhere near this much attention on his rear end or even his face, but it sure is a funny one. Someone put quite a lot of time into her chest and behind, but it does not look good on PlayStation 1.

Alone in the Dark: The New Nightmare is absolutely flawed, and it doesn’t stand out a whole lot from the crowd. But it’s definitely still worth playing. I really enjoyed it, and my interest in the series has certainly been piqued, enough that I shelled out a couple bucks to pick up the first three games yesterday. If you have a taste for survival horror and $5.99 to spare this Halloween, I recommend you pick it up yourself. You might just have a good time.