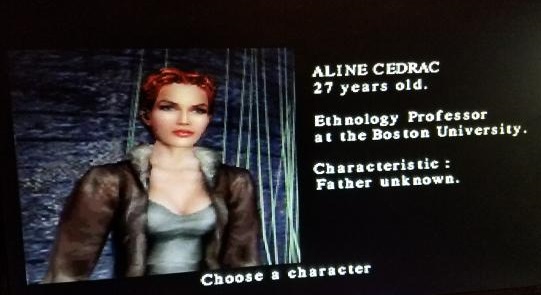 Are You My Father? Reflecting on Aline's Story in Alone in the Dark: The New Nightmare

Alone in the Dark: The New Nightmare did Aline Cedrac dirty.

From the moment I started the game, I had a feeling it would be like this. The clumsy, dramatic, and laughably obvious opening cinematic was enough to tip me off that her story would not be handled well, even though it wouldn't be until later, as it was brought up less and less, that I saw exactly how poorly (or, rather, how barely at all) her story was being told.

While there’s certainly something to be said about hints and foreshadowing, there’s such a thing as going overboard and, even if you do manage to be subtle, the tactic is only useful if you have other plot points to connect the hints and foreshadowing to later. New Nightmare screws up on both of those fronts. When it comes to Aline, the game tells us everything it has to say about her right out of the gate, and then never follows up on any of it.

Let me explain a little bit. What does the opening cinematic tell us about Aline? The first thing we learn is that she has suspicions about Professor Obed Morton’s identity, and that these suspicions motivated her to take a job working with him. We witness an agent reporting that he had “no trouble persuading her” to go to Shadow Island because she’s “convinced that Obed Morton is her…”He doesn’t tell us who or what she believes Obed to be, but his stilted statement acts to draw attention to her suspicion. Slightly later in the cinematic, while speaking to Carnby (her partner, and the game's other protagonist) on the plane, Aline confirms that she was, in fact, hired to work with Professor Morton on Shadow Island.

The second thing we learn about Aline is that she doesn’t know her father, and that she finds this troubling. I mean, she’s even dreaming about it:in a brief dream sequence, a young Aline is shown chasing after a faceless man she refers to as “daddy” before startling awake. Just in case it wasn’t made blatant enough in the dream that she’s desperate to find out the identity of a father figure she doesn’t know, the character select screen that immediately follows the cinematic states outright that Aline doesn’t know her father (see this article's header image), and, in doing so, makes it seem like an important part of her character.

By giving us these clues, the very first scene of New Nightmare makes it exceedingly obvious that Aline thinks Obed is her father. There isn’t much interpretive wiggle room here -- the game all but slaps you with a bright neon sign pointing it out. If you somehow still don't make the connection after the cinematic, investigating Aline’s pockets will turn up a letter and photo insinuating Obed is her father and enticing her to look into it further, just to make it crystal clear.

But that’s pretty much the end of it. Like I said, New Nightmare dumps out everything it has on the floor right off the bat and… that’s it. After the incredible blatancy of the beginning of the game, there is almost nothing to Aline’s story. She brings up the possibility that Obed is her father once in a blue moon, and it’s shut down each time, even once by the professor himself. And remember how the agent at the beginning mentioned “persuading” Aline? It turns out the photo was doctored, and the letter was penned only to pique her interest and bring her to Shadow Island. There are no journals or other documents around the island to hint at Obed’s involvement with a woman to stir up what little speculation could remain about him being her long-lost dad. And Aline barely reacts to any of this. She undergoes no character growth, nothing to indicate she's changing in any way through any of this. Put quite simply, the game tells us, “Whoops! Obed Morton is not her father, and it’s no big deal after all.”

And you know, I could live with this. I could live with Aline’s story falling flat. It’s not like the game didn’t have its own separate plot to focus on, and her story wasn’t the only draw for me (even though I do have a soft spot for female characters with daddy issues). I could live with it. At least, I thought so until I saw Aline’s ending and found myself with an ache for something more. Something better.

At the end of her adventure, Aline finds herself on a narrow bridge across a bottomless chasm, facing off against a disfigured, monstrous version of Obed Morton, injected with the genetic material of the island’s monsters by his own brother in some sick, twisted experiment.

The monster speaks to Aline in a distorted voice as soon as she approaches. “My girl! My little baby girl!”

Aline appears disgusted; she seems to raise her gun just a little, and quickly chokes out, “Stop!”

He doesn’t. Suddenly his voice is no longer distorted, and he’s pleading with Aline. “Don’t listen to him! Shoot! Shoot!” A moment later, after Aline, cleary distressed, has lowered her weapon with a horrified gasp, he’s back to rasping distortion: “Daughter, would you dare shoot your own father?”

“You’re not my father!” Aline shouts back, and her voice breaks. “Nobody’s my father!”

This could’ve been an incredibly powerful moment -- if it weren’t for the rest of New Nightmare. This scene, as good as it is, is out of place. It’s the only scene in which tension and uncertainty still surround the issue, and the only time Aline really reacts to this tension and uncertainty. She's suddenly grown, accepting that she may never know her father, and that she can't let that stop her from doing what needs to be done in the face of danger, and it's great character development, but it's too late. Even as Obed regains control of his body long enough to save Aline from falling to certain death, even as he holds back a horde of monsters that have come to stop her, even as it’s implied through his sacrifice that he really could be her father after all, even as that father slips away one last time -- it’s too late. The rest of the game took away the foundation for the ending's weight long before. It was an ending written for a game that New Nightmare wasn’t, and for an Aline Cedrac more developed than she will ever be. She had so much potential, and fell so flat. And for me, that will always be one of New Nightmare's biggest disappointments.